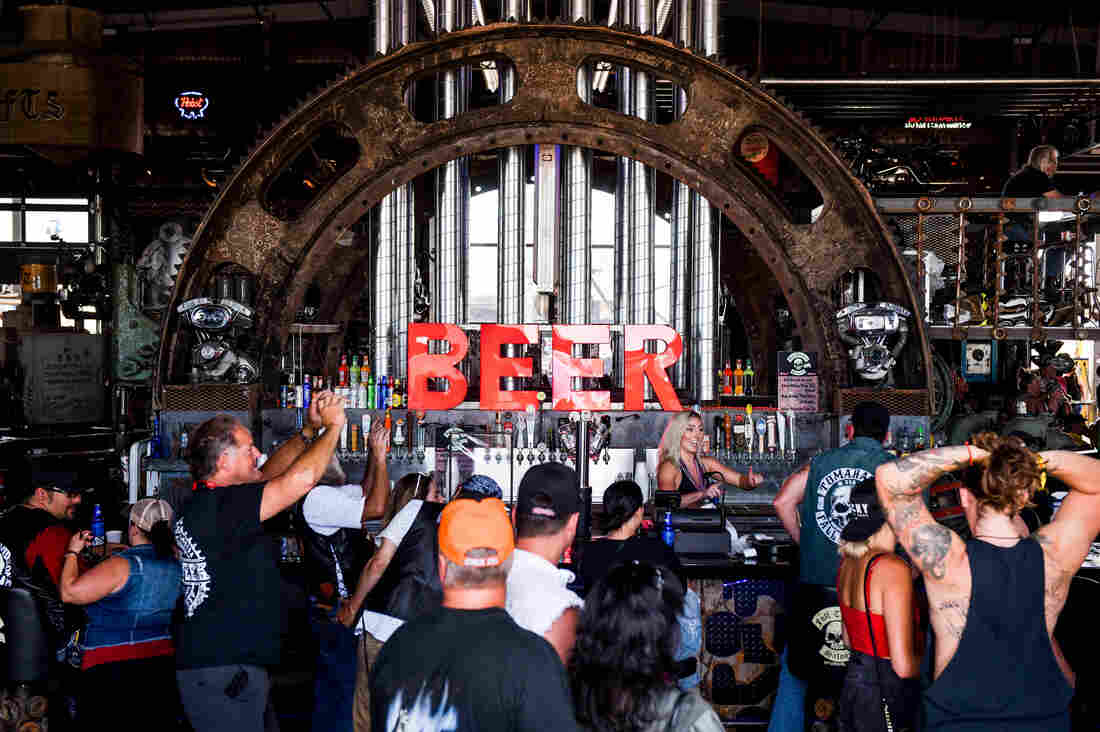 The Full Throttle Saloon in Sturgis, S.D., draws a crowd earlier this month during the 80th annual Sturgis Motorcycle Rally. 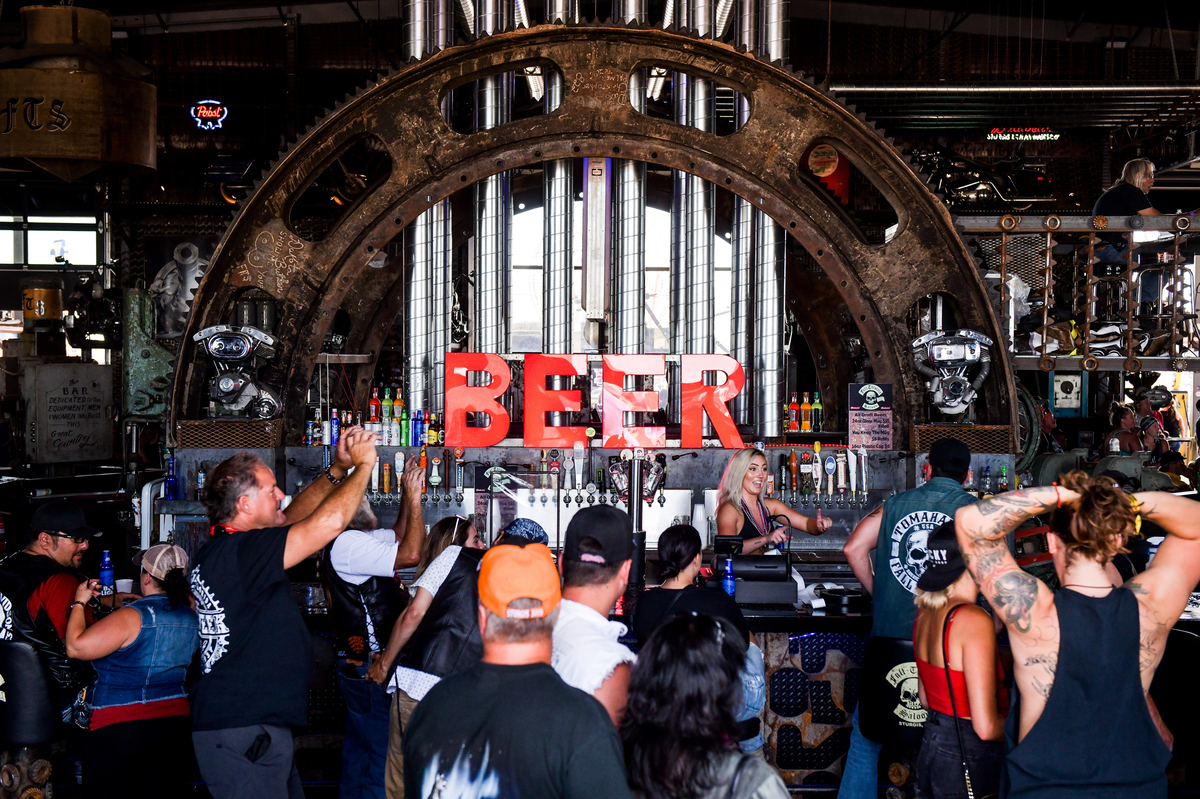 The Full Throttle Saloon in Sturgis, S.D., draws a crowd earlier this month during the 80th annual Sturgis Motorcycle Rally.

From the early days of the U.S. coronavirus outbreak, states have wrestled with the best course of action for the nation’s imperiled bars and nightclubs. Many of these businesses find their economic prospects tied to a virus that preys on their industry’s lifeblood — social gatherings in tight quarters.

Some states moved quickly to shutter bars early in the pandemic for months or longer, keeping them entirely closed or open only under strict conditions. Many other states moved to reopen bars on a faster timeline — only to shut them down again as viral case counts rebounded this summer.

But some legal experts say public health authorities have broad power to close down any business they deem to be particularly dangerous.

“They can’t regulate in ways that are arbitrary or capricious,” says Lawrence Gostin, professor of law at Georgetown University. “But if there’s good evidence that a certain class of establishment is causing the spread of infectious diseases, it’s absolutely clear that they have the right — in fact, they have the duty — to do it.”

The evidence that bars are a particular problem has continued to grow, says Dr. Ogechika Alozie, an infectious disease specialist in El Paso, Texas.

“If you were to create a petri dish and say, how can we spread this the most? It would be cruise ships, jails and prisons, factories, and it would be bars,” Alozie says. He was a member of the Texas Medical Association committee that created a COVID-19 risk scale for common activities such as shopping at the grocery store.

“You can’t drink through the mask, so you’re taking off your mask. There are lots of people, tight spaces and alcohol is a dis-inhibitor — people change their behaviors,” Alozie says.

At The Beer Junction in West Seattle, the stools are stacked in the corner. These days the craft brewery’s taps flow for to-go drinks only.

“It would be very lively,” Allison Herzog, the brewery’s owner, says of its pre-pandemic days. “It is weird to come in here and not feel that vibrancy.” 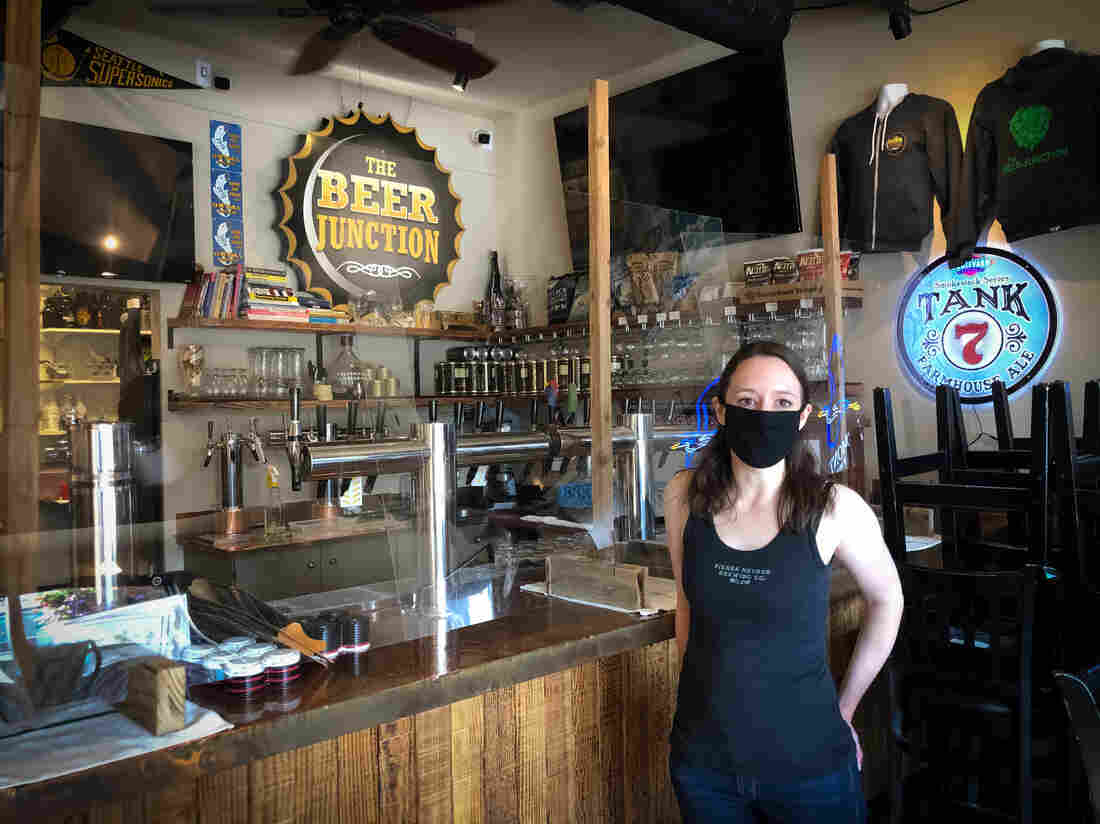 The pandemic is taxing the nation’s bar owners such as Allison Herzog, who runs The Beer Junction in Seattle. After shutting down indoor service in the spring, Herzog was finally able to reopen this summer. Within a month, the coronavirus was spreading again, and she was forced to close for a second time.

The coronavirus pandemic has compromised the bedrock of Herzog’s business: people gathering together to drink, talk, laugh and let loose in each other’s company.

“I wake up and I think every day, what am I going to do to keep going?” Herzog says.

In the spring, The Beer Junction shut down indoor service as the coronavirus swept through Washington state. Then, as coronavirus numbers improved, restrictions on restaurants and bars were eased in the early summer. Finally, Herzog was allowed to open up a few tables and serve a limited number of customers indoors.

“I could hear people laughing in the bar,” she recalls. “It just touched my heart, and it felt like something was normal again.”

But this reprieve did not last long.

By late July, the coronavirus had made a resurgence in the Seattle area, and Washington Gov. Jay Inslee soon put another ban on indoor service at places that sold alcohol — including Herzog’s shop.

Even though it’s hard on her bottom line, she says she believes the risk of the coronavirus justifies the decision.

What the evidence shows

There are now many examples across the U.S. of bars and nightclubs that have seeded outbreaks.

In July, Louisiana rolled back its limited opening of bars, reporting that more than 400 people had caught the coronavirus just from interactions at those businesses. Texas and Arizona ordered bars to close down when infections skyrocketed and scenes of packed bars persisted. In Michigan, public health authorities have traced close to 200 cases back to a now-infamous East Lansing pub.

While bars can ask customers to wear masks and sit at tables, Alozie says he is skeptical that such guidance, however well-intentioned, can be successful.

“The reality is, man proposes, God disposes,” he says. “Alcohol disposes even more.”

An outbreak linked to a bar and grill in southwest Washington state is instructive.

For karaoke night, the staff spaced the tables, checked temperatures at the door, even put up plexiglass barriers near the singers. Nonetheless, a few weeks later, close to 20 customers and employees had been infected.

“You’re asking customers who are drinking and doing karaoke to follow the physical distancing and masking requirements,” says Dr. Alan Melnick, director of the Clark County Health Department, which conducted the investigation. “So that was challenging in this particular situation.”

The chance of catching the virus through tiny airborne respiratory droplets, known as aerosols, goes up significantly in indoor spaces.

When some states reopened bars after the first round of lockdowns, Jose Luis-Jimenez, who studies the behavior of aerosols, was dismayed.

“I thought these were superspreading events waiting to happen, and look — that’s what happened,” says Luis-Jimenez, a professor at the University of Colorado Boulder. “It was irresponsible.”

Many of the risk factors for airborne transmission of the coronavirus come together in a bar — think of each one like a “check mark” that adds to a person’s overall risk.

And behavior matters, Luis-Jimenez says. It can determine whether an indoor gathering becomes a superspreading event, which is why a bar is more problematic than even a restaurant.

“I would put my money that a bar is where the transmission is most likely to occur [compared with a restaurant] because that’s where you’re most likely to have people that are shouting and who are not wearing masks,” he says.

Bars are fighting back

In a handful of states, some bar owners are fighting in court against government orders that they stay closed. Bars and taverns have brought legal challenges to coronavirus restrictions in Colorado, Florida, Arizona, Tennessee, Texas and Louisiana.

In Arizona, more than 60 bars filed a lawsuit to overturn the governor’s order to shut them down.

Ilan Wurman, an associate professor of law at Arizona State University, is representing the bar owners who argue that the state has unfairly singled them out while letting restaurants stay open late and serve alcohol.

The U.S. Supreme Court rejected a Nevada church’s challenge to limitations on holding services, although attorneys for the church had argued that the restrictions on worship services were more onerous than the ones placed on casinos and restaurants.

“We have to remember we’re in an emergency,” Gostin says, regarding the court’s decision. “The health department should have reasonable discretion so long as it’s acting on the basis of good evidence.”

Closing bars has a “double effect,” according to Dr. Joshua Sharfstein, vice dean for Public Health Practice and Community Engagement at Johns Hopkins Bloomberg School of Public Health. “It reduces the spread of the virus within the bar, and it makes everyone take this situation more seriously.”

Sharfstein, who is also a former secretary of health and mental hygiene for the state of Maryland, says he thinks, in most communities, keeping bars open will only set back other efforts to reopen society.

“You can’t look at the decision about bars separate from the need to save lives in nursing homes or to be able to open schools,” Sharfstein says. “They’re all connected.”