If it’s a day ending in -y, researchers are probably arguing about the origins of the mysterious interstellar object ‘Oumuamua.

A newly published study in The Astrophysical Journal Letters has put the kibosh on the idea that ‘Oumuamua is made of molecular hydrogen ice, an idea first proposed in April and reported by Fox News.

“The proposal by [Darryl] Seligman and [Gregory] Laughlin appeared promising because it might explain the extreme elongated shape of ‘Oumuamua as well as the non-gravitational acceleration,” the study’s lead author, Dr. Thiem Hoang, senior researcher in the theoretical astrophysics group at the Korea Astronomy and Space Science Institute (KASI), said in a statement. “However, their theory is based on an assumption that H2 ice could form in dense molecular clouds. If this is true, H2 ice objects could be abundant in the universe, and thus would have far-reaching implications. H2 ice was also proposed to explain dark matter, a mystery of modern astrophysics.” 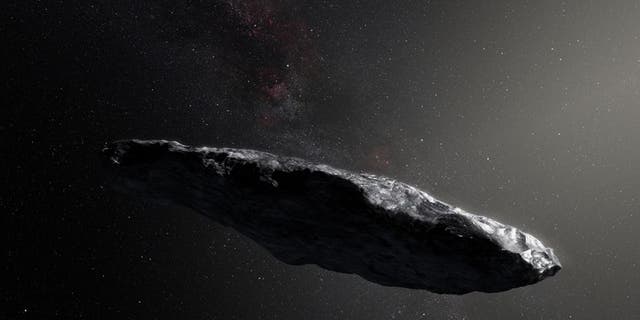 Dr. Avi Loeb, a co-author of the new study, said the researchers wanted to test the dark matter proposition, as well as the assumptions in the theory.

“We were suspicious that hydrogen icebergs could not survive the journey – which is likely to take hundreds of millions of years – because they evaporate too quickly, and as to whether they could form in molecular clouds,” Loeb added in the statement.

In an email to Fox News, Laughlin said the new study is “an interesting analysis” and discusses some of the issues raised by the new paper.

“I think that while Hoang and Loeb have raised cogent and incisive points, there’s still (in my view) an excellent chance that the H2 ice hypothesis is correct,” Laughlin told Fox News. “To be frank, I think the most worrisome concern for the H2 ice hypothesis is simply whether the dense cores of molecular clouds can really get cold enough for H2 to start accreting onto the larger grains. The temperature needs to get down quite close to the temperature of the microwave background for the process to work. Fortunately, if our H2 ice hypothesis is right, then the Vera Rubin Telescope (LSST) will find more objects like ‘Oumuamua, and it will find them in time for their composition to be better determined.”

In November 2018, a study published by Loeb and others at the Harvard Smithsonian Center for Astrophysics suggested ‘Oumuamua could be “a lightsail of artificial origin” sent from another civilization. 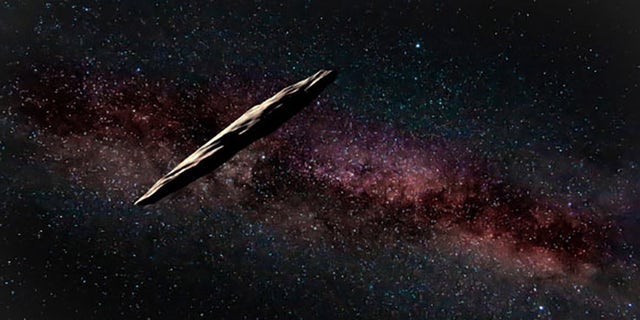 An artist’s rendering of ‘Oumuamua, a visitor from outside the solar system. (Credit: The international Gemini Observatory/NOIRLab/NSF/AURA artwork by J. Pollard)

However, the researcher who discovered ‘Oumuamua, Canadian physicist and astronomer Robert Weryk, said the idea it was from another civilization was just “wild speculation.”

‘Oumuamua, which means “pathfinder” or “scout” in Hawaiian, was first classified as an asteroid when it was spotted in 2017 traveling at 196,000 mph, but has recently been found more akin to a comet.

The place of its origin is still a mystery, though some have suggested it could have come from giant molecular cloud (GMC) W51, 17,000 light-years from Earth. However, the researchers said that is likely not.

“The most likely place to make hydrogen icebergs is in the densest environments of the interstellar medium,” Loeb added. “These are giant molecular clouds.”

“Thermal sublimation by collisional heating in GMCs could destroy molecular hydrogen icebergs of ‘Oumuamua-size before their escape into the interstellar medium,” Loeb continued.

Whatever the origin of ‘Oumuamua, Loeb is confident that other objects like it will be discovered in short order.

“If ‘Oumuamua is a member of a population of similar objects on random trajectories, then the Vera C. Rubin Observatory (VRO), which is scheduled to have its first light next year, should detect roughly one ‘Oumuamua-like object per month,” the researcher explained. “We will all wait with anticipation to see what it will find.”

A second interstellar object, Comet 2I/Borisov, was discovered in August 2019.

No longer observable by telescopes as of January 2018, many have speculated about ‘Ouamumua. In addition to the light sail theory, some have theorized that it is a comet or an asteroid.

The mystery about its exact nature deepened in late 2018, when NASA said it had been looking in ‘Ouamumua’s direction for two months but did not originally see it.