Researchers examining a nearly complete skeleton of a 240-million-year-old “megapredator” have found another large reptile in its stomach.

According to a study published in the scientific journal iScience, the 15-feet long ichthyosaur known as Guizhouichthyosaurus had swallowed a nearly 12-foot long thalattosaurs.

The ichthyosaur likely died soon after it devoured its prey.

“We have never found articulated remains of a large reptile in the stomach of gigantic predators from the age of dinosaurs, such as marine reptiles and dinosaurs,” University of California Davis professor and study co-author Ryosuke Motani said in a statement. “We always guessed from tooth shape and jaw design that these predators must have fed on large prey, but now we have direct evidence that they did.” 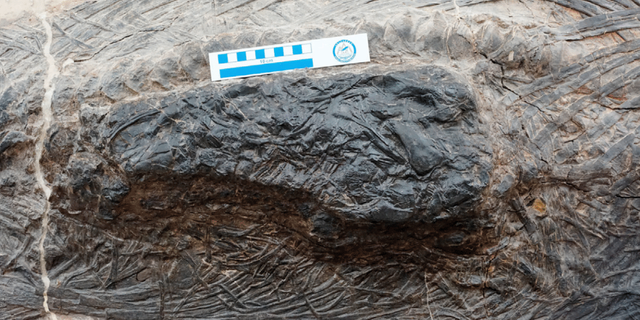 Closeup of the stomach area of a fossil ichthyosaur, Guizhouichthyosaurus, showing part of the body of another large marine reptile. The ichthyosaur had swallowed its prey shortly before it died and was fossilized. This is the oldest known direct evidence of megapredation, or a large animal eating another large animal. (Credit: Da-Yong Jiang, et al.)

The fossilized remains of the ichthyosaur were found in southwestern China in 2010. 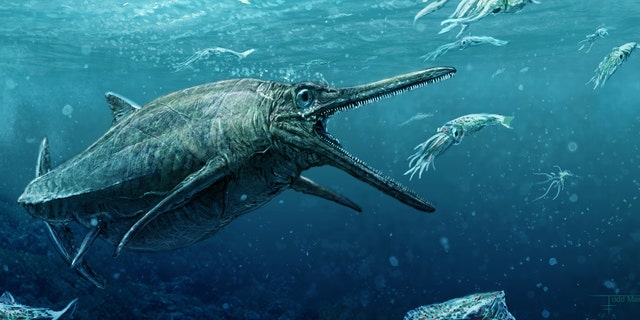 File photo: An artist’s rendering of the ichthyosaur.
(Todd Marshall)

Ichthyosaur means “fish lizard,” an apt way to describe the giant sea-dwelling creature. The earliest known ichthyosaurs had long, flexible bodies and likely swam similar to modern-day eels, according to an article from the University of California Berkeley. 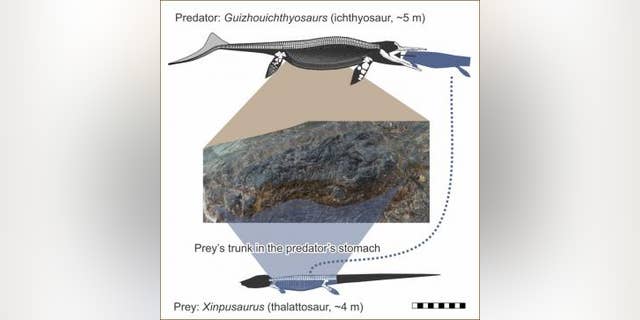 Stomach contents of a fossil ichthyosaur show that it ate another reptile almost as big as itself just before it died. (Credit: University of California, Davis)

Given the size of the prey, it’s possible the ichthyosaur could be reclassified as an “apex predator,” putting it at the top of the food chain during the early part of the Mesozoic Era.

“Air-breathing marine predators have been essential components of the marine ecosystem since the Triassic,” the researchers wrote in the study’s summary. “Many of them are considered the apex predators but without direct evidence—dietary inferences are usually based on circumstantial evidence, such as tooth shape. Here we report a fossil that likely represents the oldest evidence for predation on megafauna, i.e., animals equal to or larger than humans, by marine tetrapods—a thalattosaur (∼4 m in total length) in the stomach of a Middle Triassic ichthyosaur (∼5 m).”

The researchers continued: “The predator has grasping teeth yet swallowed the body trunk of the prey in one to several pieces. There were many more Mesozoic marine reptiles with similar grasping teeth, so megafaunal predation was likely more widespread than presently conceived.”

STUNNING DINOSAUR DISCOVERY: EXPERTS MAY HAVE UNEARTHED A BABY TYRANNOSAUR FOSSIL IN MONTANA

Some ichthyosaur fossils discovered have shown the creatures to give birth to live, developed young. Unlike dinosaurs, which ichthyosaurs have been confused with, they did not lay eggs.

Researchers continue to learn more about ichthyosaurs thanks to recent fossil discoveries.

In January 2019, researchers used 3-D technology to unlock the secrets of a nearly 200-million-year-old ichthyosaur skull, which was discovered in a U.K. farmer’s field in 1955.

In December, a British man walking his two dogs on a beach in England stumbled upon what is believed to be the fossilized remains of a 65-million-year-old ichthyosaur.