Louisiana is likely to be spared from the one-two punch of back-to-back hurricanes this week as
Marco was downgraded to a tropical storm Sunday night. But the state is still in the path of Tropical Storm Laura, which is forecast to strengthen into a hurricane before making landfall in the US.

Both storms were previously predicted to strike the Louisiana coast as hurricanes within miles of each other and in a 48-hour period — an event unlike any other in modern meteorological history, National Weather Service meteorologist Benjamin Schott said.

But Marco is currently facing unfavorable conditions that makes it unlikely to return to hurricane strength, said CNN meteorologist Robert Shackelford. And though it could reach Louisiana with a grazing landfall by Monday evening or Tuesday morning, the storm could fizzle out while moving parallel to the coastline, he said.

Meanwhile, Tropical Storm Laura, which has already proven deadly in the Dominican Republic, is getting stronger in the warm waters of the Caribbean and will likely become a hurricane Tuesday. By Wednesday, Laura could reach Louisiana as a Category 2 storm.

‘There may not be much of a window’

If conditions are right for both Marco and Laura to strike land, the effects could pose a challenge for Louisiana officials and the residents.

With such a close time frame, “there may not be much of a window” for rescuers or power restoration crews to respond to victims between the two storms, Louisiana Gov. John Bel Edwards said.

As of early Monday, Tropical Storm Marco was about 150 miles south-southeast of the mouth of the Mississippi River with maximum sustained winds of 65 mph. The storm is moving at 12 mph toward the river’s mouth, according to the National Hurricane Center.

Also with sustained winds of 65 mph, Tropical Storm Laura was about 60 miles south of Camaguey, Cuba Monday morning. The storm was moving west-northwest at 21 mph.

Before Marco weakened, mandatory evacuations were issued Sunday for Plaquemines Parish, Louisiana, and Grand Isle, Louisiana. Hurricane warnings were discontinued for the storm, and warnings on the Louisiana coast have been changed to tropical storm warnings.

Meanwhile, Tropical Storm Laura has parts of Cayman, Cuba and the Florida Keys under tropical storm watches and warnings. Hurricane watches will likely be issued Monday.

The hurricane center issued a storm surge warning for coastal cities from Morgan City, Louisiana, east to Ocean Springs, Mississippi, and forecasters warned the
storm surge could be “life-threatening.”

Though downgraded, Marco is still expected to be a dangerous storm, bringing tropical force winds, heavy rain, flash flooding and isolated tornadoes. It could even bring surge up to 6 feet in the Gulf Coast, along with “a tremendous amount of rain,” Chinchar said.

And Laura is expected to follow closely on its heels.

“Even on Monday and Tuesday, Key West, Miami — you’re going to get some of those outer bands from Laura producing very heavy rain and very gusty winds,” Chinchar said.

Before it reaches the US, Laura is expected to bring up to 12 inches of rain to parts of the Caribbean.

The Dominican Republic already experienced Laura’s wrath Sunday. At least nine people have died in the Caribbean due to the storm, at least three in the capital of Santo Domingo, according to the country’s Center of Emergency Operations.

The victims in the capital include a 7-year-old boy who died with his mother after a wall collapsed in their home and a third person who died after a tree fell on a house.

The Dominican Republic’s President Luis Abinader said Sunday that an army corporal was killed while helping with rescue efforts in Pedernales province.

Five people were killed in Haiti, according to country’s Civil Protection, including a 10-year-old girl. 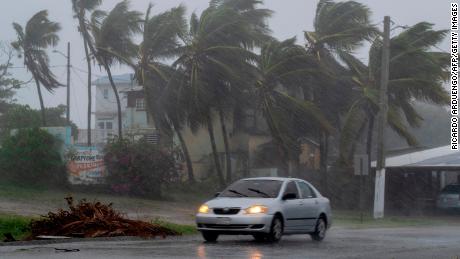 The US prepares for impact

In the US, President Donald Trump approved an emergency declaration on Sunday for Louisiana, ordering federal assistance to coordinate disaster relief efforts.

Texas Gov. Greg Abbott requested a federal emergency declaration for 23 counties in his state. Galveston County Judge Mark Henry said Sunday that Marco would likely not be a factor for residents. “Unfortunately, we can’t say the same about Tropical Storm Laura,” Henry said.

Stacie Osborn told CNN it took her 30 minutes to get through the checkout line at a market in New Orleans.

“I stocked up on enough food for the week, extra water and gassed up my car just in case — the usual,” she said.

Meantime, John Snow in Baton Rouge said the line at his local Costco was wrapped around the building just 10 minutes after opening.

“It ended up taking about 20 to 25 minutes to get into the store, which wasn’t ideal with the Louisiana heat and masks on,” he said, “but it wasn’t terrible.”

Snow said he was stocking up on the essentials and getting gas. “As always, we hope for the best but plan for the worst.”