A newly released image of the comet NEOWISE shows it survived its encounter with the sun intact.

The image, taken by the Hubble Space Telescope on Aug. 8, shows the dust and gas coming out of the comet as it emerged from behind the sun. This glow measures around 11,000 miles across in the image and shows the detail at which the Hubble is able to take photos.

“Hubble has far better resolution than we can get with any other telescope of this comet,” Caltech graduate student Qicheng Zhang said in a statement. “That resolution is very key for seeing details very close to the nucleus. It lets us see changes in the dust right after it’s stripped from that nucleus due to solar heat, sampling dust as close to the original properties of the comet as possible.” 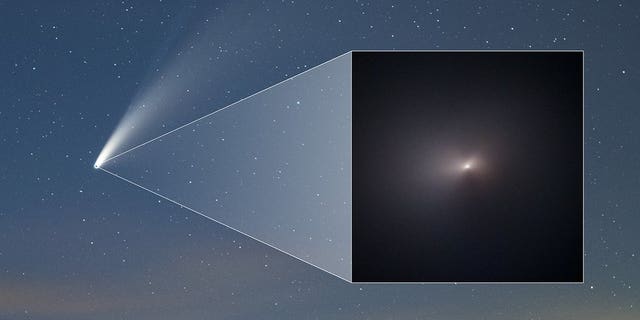 This ground-based image of comet C/2020 F3 (NEOWISE) was taken from the northern hemisphere on July 18, 2020. The inset image, taken by the Hubble Space Telescope on Aug. 8, 2020, reveals a close-up of the comet after it passed by the sun. Hubble’s image is centered on the comet’s nucleus, which is too small to be seen, as it is estimated to measure no more than 3 miles (4.8 kilometers) across. Instead, the image shows a portion of the comet’s coma, the fuzzy glow, which measures about 11,000 miles (18,000 kilometers) across in this image. Comet NEOWISE will not pass through the inner solar system for another nearly 7,000 years. (NASA, ESA, Q. Zhang (Caltech), A. Pagan (STScI), and Z. Levay)

“Because comets are made of ice, they are fragile,” Zhang added in a different statement. “And we weren’t entirely sure whether Comet NEOWISE would survive the journey around the sun.”

Comet ISON, which passed by the sun in 2013, did not survive its encounter with the sun.

Most comets have two tails, a dust tail and one made of electrically charged molecules, according to NASA. However, images released from NASA in July suggested that NEOWISE may actually have two ion tails.

“The jets contain material from deep inside the comet,” Zhang explained. “We are able to see what all this buried material looks like.”

It is the brightest visible comet to be seen in the Northern Hemisphere since Hale-Bopp, which flew past Earth in 1997.

NEOWISE was a photographer’s dream, providing incredible images both on Earth and in space.

It was observable with the naked eye from mid-July to mid-August. The comet’s closest approach to Earth was on July 22 at a distance of about 64 million miles.

Comet NEOWISE is now going back toward the outer part of the solar system and will not return for another 6,800 years.

GET THE FOX NEWS APP