As medical centers across the country were ordered to gird for several hundred additional serious COVID-19 cases by the end of the month, Israel’s total case count per capita overtook that of the United States on Monday, according to the latest data from Johns Hopkins University, which tracks worldwide coronavirus numbers.

At the same time, Israel’s death rate per million inhabitants stands at 133, compared to the world average of 123.3, the date showed.

Despite initial success in tackling the pandemic, Israel has in recent weeks become one of the countries with the highest number of daily cases per capita, and that is now starting to show in total numbers as well.

Ronni Gamzu said in an interview with Channel 12 news that he fears the number of COVID-19 patients in serious condition could reach 800 by the end of the week, a number that has been frequently cited as the maximum Israeli hospitals can cope with. 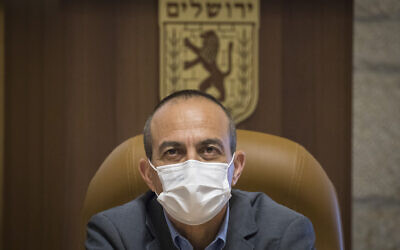 Gamzu said he feared that, at current rates, Israel will see some 20 deaths a day, or 600 per month, nearly half of the national toll since the start of the pandemic.

The strain on the healthcare system came as the country was under a nationwide lockdown, in an attempt to bring down the infection rates.

The new lockdown is simultaneously more permissive and more complex than the weeks-long closure imposed earlier this year, with numerous directives and exceptions to those directives, seeming to cause public confusion as to what is and is not, in fact, allowed.

“Every day that we have 5,000 cases diagnosed — take into account that it means 25 people dying,” Gamzu warned on Monday, in an interview with the Kan public broadcaster. “It is also young people. It is ravaging the country.”

Health Ministry figures on Monday showed that there were 2,565 new virus cases diagnosed on Sunday, with the number of cases since the start of the pandemic rising to 188,760. The figure was lower than recent days, and may have been the result of fewer tests run over the holiday weekend. Figures showed close to 11 percent of tests were confirmed positive.

Of the 51,503 active cases, 1,348 people are hospitalized with the virus, including 651 patients in serious condition of whom 160 were on ventilators. The death toll stood at 1,260, with only six deaths recorded Sunday, well below the 24 deaths the day before.

Hospitals in Jerusalem and Ashdod announced on Monday that they could no longer take in additional coronavirus patients, due to overload.

The announcements by Jerusalem’s Shaare Zedek Medical Center and Ashdod’s Assuta Medical Center came as Health Ministry Director General Chezy Levy ordered all hospitals to suspend elective surgeries and dedicate all of their resources to the pandemic response. 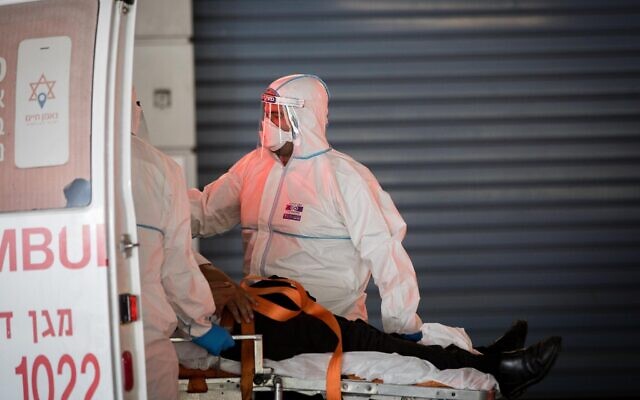 “We expect to end the next 10 days with an increase of 200-300 serious, ventilated or critical patients,” wrote Levy. “I ask you to treat this situation as an emergency situation for the healthcare system. Hospitals must end elective, non-essential procedures.”

Patients who arrive at Shaare Zedek or Assuta will be directed elsewhere.

According to the Health Ministry, in addition to Shaare Zedek and Assuta, the coronavirus wards at a number of major hospitals around the country have topped 100 percent capacity — Jerusalem’s Hadassah Ein Kerem (129%) and Hadassah Mount Scopus (100%), Netanya’s Laniado hospital (120%), and Ramat Gan’s Sheba Medical Center (109%).

With hospitals overflowing across the country, Defense Minister Benny Gantz on Monday ordered the military to prepare to establish a field hospital for coronavirus patients.

Jerusalem, Israel’s largest city, has the most active coronavirus cases — 5,637 — with over 3,000 diagnosed in the past week, while Ashdod places third nationwide, with 1,878. The ministry also said Monday that 3,157 medical staff are currently in quarantine nationwide, including 430 doctors and 889 nurses.